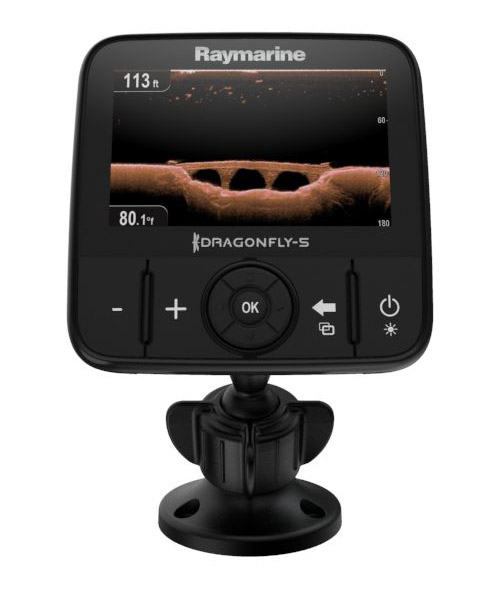 Looking for a balanced fishfinder? Then our today’s Raymarine Dragonfly 5 Pro review will be perfect for you! Dragonfly 5 has all the features to deliver outstandingly high-quality results if you will be fishing in moderate-depth waters!

But that is not all Dragonfly 5 has to offer. This fish finder has a couple of interesting features that distinguish it from the other models of its price range. Wonder what’s so special about this model? Then let us get started with our review, which will provide you with all the data on Dragonfly 5’s great features! Let’s go!

The sonar transducer unit is a great suit for moderate depths and larger areas. It features 2 channels – sonar conical beam + DownVision wide fan beam. Unfortunately, the manufacturer doesn’t specify the transducer frequencies on their web page or the product page on Amazon.

The depth range of the CHIRP DownVision sonar is 600ft max. That is pretty much enough if you are not going to fish in deep water. If you want something more, you can go for CHIRP Sonar models, which can show readings on up to 900ft of depth.

Besides depth, the sonar transducer shows data on the water temperature.

With the transducer of Dragonfly 5, you will be able to easily target underwater structures and, most importantly, fish.

The photo-like sonar images will greatly help you with locating and keeping track of the fish targets.

As you would expect from a model of Dragonfly 5’s price range, this fish finder comes with a precise GPS module, which delivers data on geographical location as well as the speed of your boat. The inbuilt GPS supports 72 GPS/GLONASS channels.

With cartography, Dragonfly has almost no issues as well. This fishfinder comes with preinstalled Navionics North American Gold with lakes, rivers, and coastal maps. If you are not satisfied with the in-built cartography capabilities or need outside-US maps, you can always purchase expansion charts like Navionics, C-MAP by Jeppesen, or Raymarine LightHouse.

Another great feature of Dragonfly 5’s cartography is the capability of streaming live sonar data from the fish finder to your mobile device via Raymarine’s Wi-Fish mobile app. With the app, you can rewind, save, and even share your sonar data with your friends on social networks.

Besides Wi-Fish, you can generate live bathymetric charts with the Navionics SonarChart live app. You can later upload your sonar logs to Navionics.com, which then will be used to improve the quality of Navionics cartography.

At last, the internal memory of Dragonfly 5 can store up to 3000 waypoints (in groups of 100 waypoints each) and 15 tracks (each track can store up to 10,000 points). If you wish to have more, you can expand your storage capacity with your microSD card.

The display of Dragonfly 5 is another noteworthy feature as well. In addition, it is critical in delivering high-quality sonar data. Judge yourself, would you be able to easily separate fish targets on a b/w display?

The 800 x 480 WVGA (15:9) 5-inch color display of Dragonfly 5 offers great image quality. Besides, the well-organized user interface won’t allow the elements to get stacked on top of each other and limit your view. The small indicators will show the water temp, boat’s speed, and geographical location. Most importantly, you can clearly see the readings of your sonar transducer.

That’s it for the good of the display, so let’s move on to its drawbacks. Firstly, its size may be insufficient for you. If you know that the 5-inch screen won’t be enough for you, you should go for a bigger fish finder. Secondly, although Dragonfly 5 has a waterproof rating of IPX6 and IPX7, don’t expect its display to be water-resistant as well. But displays are the weak points of almost all modern fish finders, so that’s just a point to keep in mind rather than a drawback.

And the last but not the least important feature of Dragonfly 5 is the controls. You obviously won’t get the level of comfort as with touchscreen displays, but the buttons are quite easy to use nonetheless. They are quite big and have clear markings. Another nice feature and, at the same time, a drawback is the menu selector. It allows you to surf through the UI quickly, but it will be inconvenient in typing text when you, for example, name your waypoints. Otherwise, Dragonfly is a greatly convenient fish finder!

What water would be Dragonfly 5 perfect in?

Although the manufacturer doesn’t feature the transducer’s frequencies, the max depth of 600ft of the default transducer makes this fish finder a more mid-range model. It isn’t appropriate for both great depths and delivery of exceptionally detailed readings. Overall, this model should be ideal for those who will be fishing in not too deep water.

I live outside the United States. Do I need to purchase map expansions/chart upgrades?

If you want to have high-detail maps of your area, you will have to buy chart upgrades or maps.

Now, do you see what’s so great about Dragonfly 5? Although it has some noticeable drawbacks like the absence of data on the transducer’s frequencies and some minor issues with its convenience, it is a nice pick overall. If you are looking for a well-balanced fish finder, this model is created for you!

Hopefully, our Raymarine Dragonfly 5 Pro review has made some things clear for you. After all, research and search are the most important aspects of buying a product. You surely don’t want to buy a fish finder with features which have no use for you. So think before you make your final choice!

You may love to look at our Raymarine Dragonfly 4 dv reviews. Good luck!

Last updated on January 4th, 2021 Today, catching fish is easier than ever. The application of modern technologies …

Last updated on January 13th, 2021 So you are interested in a Lowrance Mark 4 review? You have …