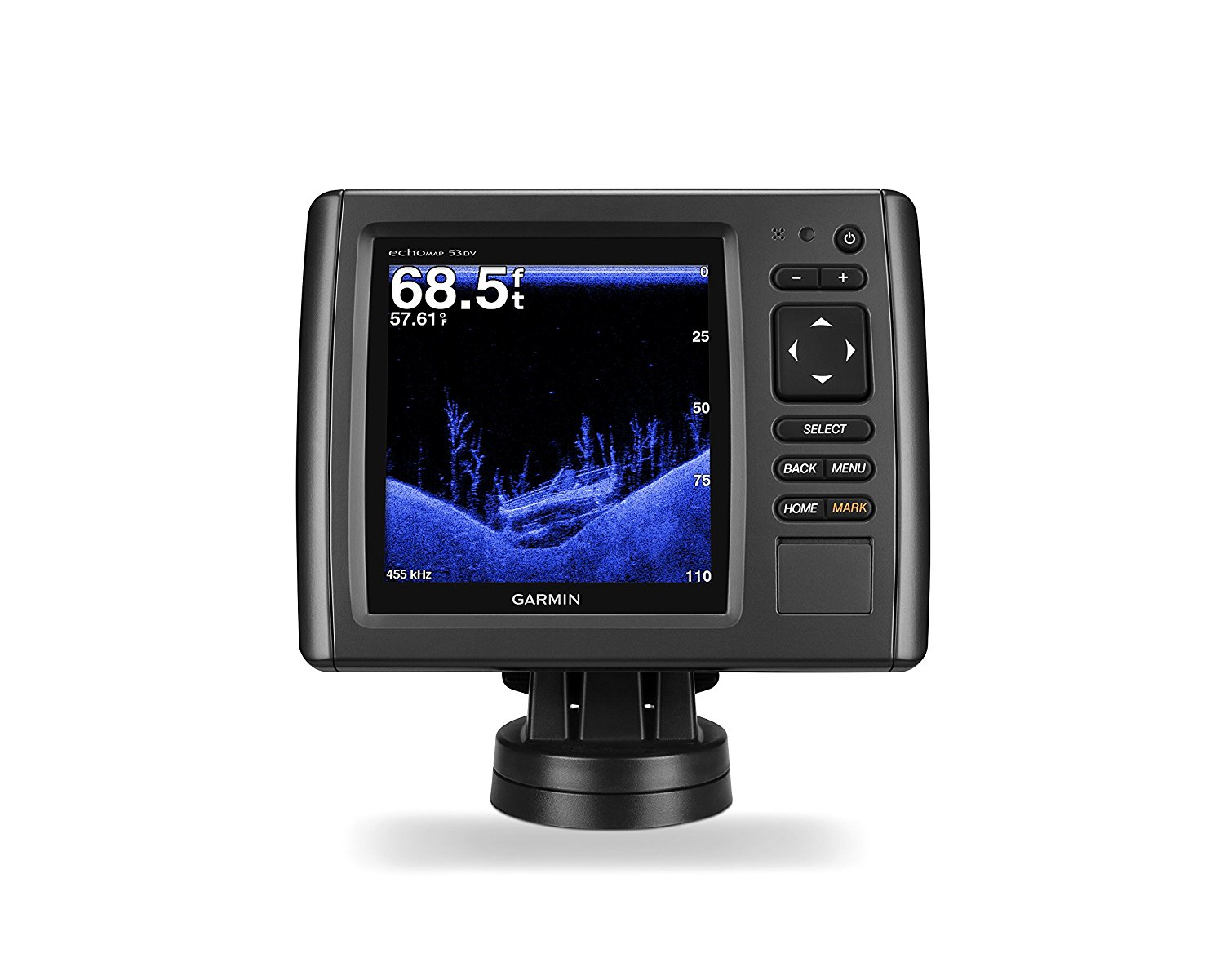 Fishing can be boring if you don’t happen to carry a finder with it. Yet, on top of that, a finder with all those advanced features are also quite hard to find. So if you are looking for a clear scanning down imaging fishfinder combo, the 53dv can be your solution. Not only these features are the reason that you will be depending on to buy this stuff, but there are also more features than we thought to highlight with this Garmin echomap 53dv review.

To add more, the good news is that the echoMAP CHIRP series of the brand is quite becoming popular as you will find it easy to operate. So it’s actually chance-grabbing news, especially for the beginners. We hope that this garmin echomap review will help you in your decision.

Garmin DownVü scanning sonar gifts you nearly a photographic image down to 750 feet deep.  So you can clearly see all the activities of everything, be it structures, submerged objects, and fish! Moreover, it uses a 2.5-degree thin beam in fore to aft, but is much wider from side to side, with an angle of 53 degree.

However, the brand has combined the DownVü scanning sonar and Garmin HD-ID sonar into one transducer so it’s like a 2 in 1 sonar game. Furthermore, the 2D sonar uses 2 beams having a conical shape for each of the frequencies. The sonar beam for the 200 kHz has an angle of 15 degree which you will find more focused and best for shallow waters while the 77 kHz beam is great for medium depths with an angle of 15 degree.

Besides, you will also get Minn Kota and Motor Guide trolling motors that the HD-ID sonar will support with integrated transducers.

Additionally, it also comes with a sonar-recording capability that manages the timing of the sonar return with the position of your boat and stores digital information so you can playback. So all you have to do is, use the User Data Sharing Cable so you can share routes and waypoints between multiple devices.

The device also features maps including 17,000+ U.S. rivers, lakes, and reservoirs. The LakeVü HD shows you an excellent detail of underwater features with Safety Shading that helps you designate a minimum depth. Moreover, the Quickdraw Contours is another software feature that you will find it already installed on your Garmin device.

It helps to create your very own personalized HD fishing maps instantly with 1-foot contours. However, whenever you are off the water, you can keep your echoMAP safely. It’s that much easy thing to do. You don’t even need to mess with plugging and unplugging wires from the device as the cords plug directly to the mount. So you can install quickly and remove your echoMAP from power and the mount.

Its 5 Hz GPS/GLONASS enables you to refresh your position and heading 5 times each second so that it can get your movement more fluid on the screen. This means, It makes dropping up to 5,000 precise waypoints and getting your way back to your hot spots quick and easy.

Fish Symbol ID is another sonar function that helps in attributing fish icons to the sonar returns which are interpreted as fish. In short, it will show the fish instead of fish arches.

Besides, A-Scope and Bottom Lock are two other sonar functions that you would like to use a lot. While the Bottom Lock keeps track of the bottom via showing it flattened regardless of what the shape it is, There is another A-Scope feature which is a vertical flasher view that indicates the most recent sonar echo.

Not only that, but there are also other 2 important features that this device provides: sonar recording and sonar rewind. You will also find a zoom-in just like the other echoMAP series units.

Q: What is the difference between the 53dv and the 73dv?

Q: Does it display speed?

A: Yes, the unit displays speed.

Q: Will this unit take other micro-cards other than Garmin?

Q: Does this unit require an external antenna?

A: No, it works well without any external antenna.

Q: Does this unit get you back to the launch that you started at?

A: Yes. It features a Series of chart-plotter or sonar combos and the preloaded LakeVü cartography. All you have to do is, put in your starting coordinates and destination coordinates simply and they will pop up on your screen. Afterward, follow it reversely when it gets time to go back home.

Q: What kind of transducer is included?

A: It’s Transom-mounted. You will also get a separate kit where you could mount it to at trolling motor,

So overall from this Garmin review, you will find the Garmin echoMAP 53dv quite great for a small GPS and fishfinder combo unit. As it has LakeVü charts, and a 77/200 transducer, it’s pretty obvious that this is only for freshwater use.

However, other than some drawbacks, the device manages to impress us well with some great features and functions. So you do actually get what you pay for. Moreover, we hope that this Garmin echomap 53dv review helps you decide to take it or leave it.

The Garmin Echo 500c fish finder is a device that every fisherman dreams of. It easily locates the …