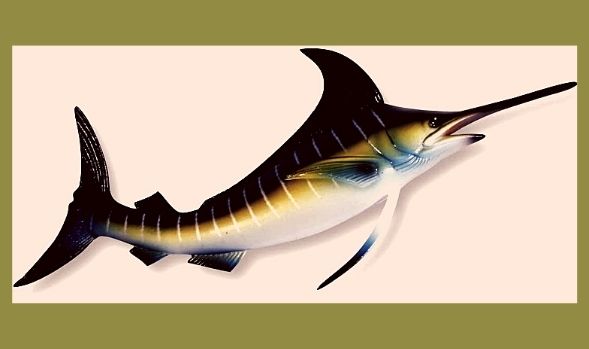 Blue marlin fish are from the family of Istiophoridae. They include the Atlantic Blue and the Indo-Pacific blue marlins. An adult blue marlin weighs approximately 94 kg. They are among the fastest marine swimmers. Blue marlins are aggressive fish and they respond well to splash and bubble tails.

Yes. Blue marlins are edible. The most popular dish made from the blue marlin is the smoked marlin. It is among the most delicious seafood. Marlins are similar to swordfish in terms of looks but they do not taste the same way. Most marlin lovers say that it tastes like tuna only that it is stronger in flavor. They spend most of their time in open waters along the coastline where the waters are warm.

In some Asian countries, they consume raw marlin which is diced in small pieces and served with soy sauce. They refer to it as Sashimi. This means that if it is to be eaten raw, it has to be handled with great care to keep it fresh. Marlin can also be made as fillets. Marlin may also be prepared by baking, shallow frying, and grilling. It is a common entrée in most restaurants.

Mostly the blue marlins are released back into the water when caught by recreational fishermen. This is because they are becoming extinct as days go by. They are aggressive and this makes some of them die during fishing. Their ability to battle makes them qualified to sport fish. They are becoming an endangered species due to overfishing and water pollution.

Eating the blue marlin has many health benefits. It has low fat and sodium levels which makes it fit for consumption. The blue marlin is a good source of vitamin B12, B6, selenium, niacin and is also rich in protein. It also contains omega 3 fatty acids.

However, there may be some risks when consuming older and larger marlin. This is because they have high mercury levels that make them unfit for human consumption. The longer the marlins are in the water, the more their foods are likely to contain more mercury.

The blue marlin has features similar to those of a swordfish and this makes it unpopular for eating as it has a gamey taste. Their pectoral fins are less rigid and fold easily. Blue marlin also has a pointed dorsal fin and a cobalt blue back that fades away after death.

Read: Can you eat bluefish

Consuming blue marlin is healthy for the human body as it offers different kinds of nutrients required in the body. This is although the blue marlin species are being endangered as days go by. It may be consumed raw or when cooked. The most common way of preparing the blue marlin is by smoking it. They are known to dive deeper than other marlin.

Can You Eat Lizardfish?

Lizardfish is one delicacy you will not want to miss; the fish has pure white meat that will …

Using Shirts with UV Protection – Keep You Safe Outside

Summer comes with a tone of excitement and lots of trips to the beach. While the sun brings …